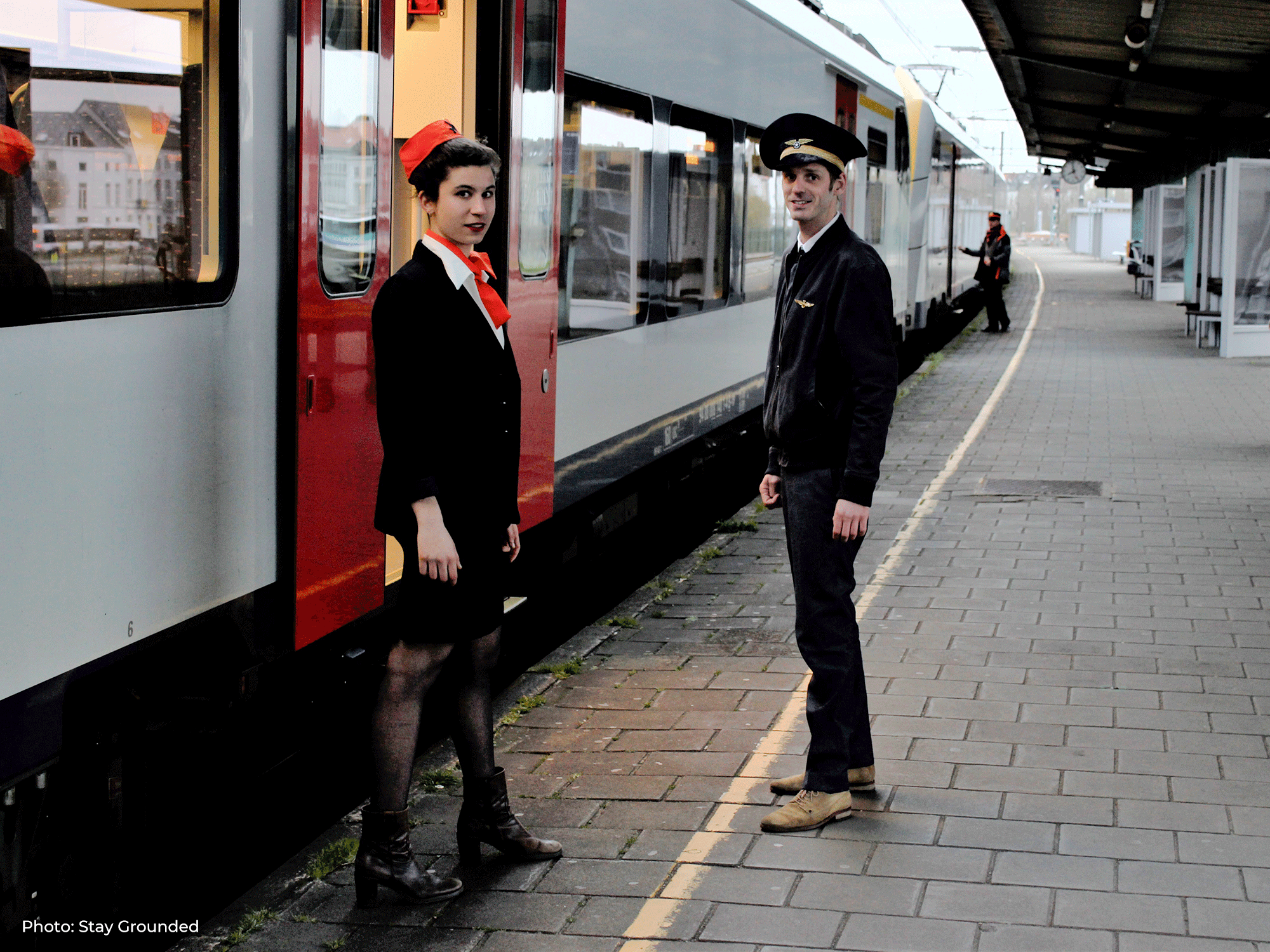 Ways for shifting towards a climate-just transport system. The role of aviation workers and the state

On August 4th, the Stay Grounded network held a webinar on the question how a just transition of aviation could be organized. Inputs by a pilot, a trade unionist, and activists from the Dominican Republic and UK allowed for a broad range of perspectives and an interesting debate.

Covid-19 grounded the majority of flights. How can this pause of aviation serve to transition towards a climate-just transport system – one that will involve less flights also in the long run? Just Transition is a demand originally developed by trade unions and now widely supported by the climate justice movement. It aims to protect the workers and communities dependent on the industry, while safeguarding the future of workers, communities and the planet. What are the current discussions inside trade unions – how to deal with employees in the current time of crisis? Could jobs be shifted to other sectors?

This webinar discussed how such a transition can be organized in a just way, taking into account the global scale, recognizing the current power balances and also looking into the role of the state and public ownership. The webinar is only one step in Stay Grounded’s work on this issue: A planned discussion paper will analyze the question in depth, and collaborations with employees and unions will be key in order to allow for a change by design, not by disaster.

Alethea Warrington from the UK based climate action charity Possible talked about their new report, which contained a joint position with trade unions representing aviation sector workers. It was published in June 2020 in reaction to the Covid-19 crisis and airline bailouts. Airlines have been making mass redundancies and using the pandemic as an excuse to push workers onto worse contracts, with poorer pay. Airline workers received a lot of public, political and media support in response to this.

Possible called for crisis support to be bound to social and environmental conditions, and to go towards supporting aviation sectors workers to retrain to enter lower-carbon sectors. With aviation being by far the most harmful mode of transport for the climate, ways to fairly reduce demand are vital. There’s a need for jobs to be created in climate friendly sectors like public transport and renewable energy. The question really is if, in the future, airlines want to have an economically viable business model, they should not change towards general transport providers.

Learning from a pilot’s experience

It was an emotional moment listening to Todd Smith, who trained seven years to be a pilot, then flew for three years and then lost his medical. This was the moment for taking a breath and realizing the issue of climate change. The inner conflict between the huge debt for the training costs, the compassion of flying versus the climate emergency began.

Speaking to other pilots, he continues to be the black sheep. The powerful industry lobby has achieved that also pilots believe its greenwashing. Cognitive dissonance and the fear of loosing the livelihood, status and compassion are reasons enough to not want to hear that a reduction of aviation might be the only way. Also unions see their main role in short-term job preservation. Todd sees the only way in advocating inside unions for a more realistic and long-term approach.

The case for or against public ownership of the aviation industry

Tahir Latif is the Aviation Group President in PCS, one of the biggest unions in the UK. He agreed with Todd Smith about the difficulty to go beyond job preservation. He pointed out the issue that workers in the aviation sector will not go back to their jobs that quickly: estimations say that pre-pandemic traffic levels will be reached in two to five years. Also automation processes lead to an insecure future. This is why a just transition is not only necessary for climate reasons. Most trade unions in the UK have been demanding state support for job protection, retrainings and re-employment.

There’s also a strong debate on the possibility for public ownership of the industry. In a pamphlet published after the webinar, PCS elaborates on the advantages of shifting the ownership away from profit-driven private corporations. Workers control and democratic decision making and accountability could be fostered. Other voices in the webinar although questioned that nationalisations would be the solution, since states are also embedded in the capitalist profit-driven economy. Many publicly owned airports are in no way more democratic or have a stronger ecological stance. The question remained, if public ownership necessarily means state ownership?

Transitioning to another form of tourism

Not only are workers in the aviation industry affected; also people dependent on tourism have suffered from the Covid crisis, and would need to be taken into account when shaping a degrowth process. Darío Solano, director of Fundación La Negreta in the Dominican Republic, member of the Global Forest Coalition, and coordinator of the Dominican Forum of Cultural Tourism shed a critical light on the republic’s dependency on tourism and extractive industries. He said that while tourism is said to be an alternative development model, in reality, the revenues often remain with few corporations while the broader population does not benefit enough. Also, airport expansions and tourism complexes have led to land acquisition and ecological harm – something that the webinar participant from Costa Rica confirmed.

Should a development model be upheld that is based on the dependency of rich Global North tourists and corporations? If not, then the question remains where to get funding from in order to create just transitions and resilient economies. A participant argued for focusing on those opportunities for a just transition that don’t rely that much on money. Simply by taking away subsidies and investments from harmful models would create space for sustainable models.

The discussion will continue inside and outside the network. Stay tuned for the upcoming release of the discussion paper on a just transition in aviation in autumn 2020.